Southern White Lies has received numerous very positive  reviews -
read the reviews below as well as those for the previous CD "Long Way from Home."
Here's a SWL few highlights, more detailed below with links. 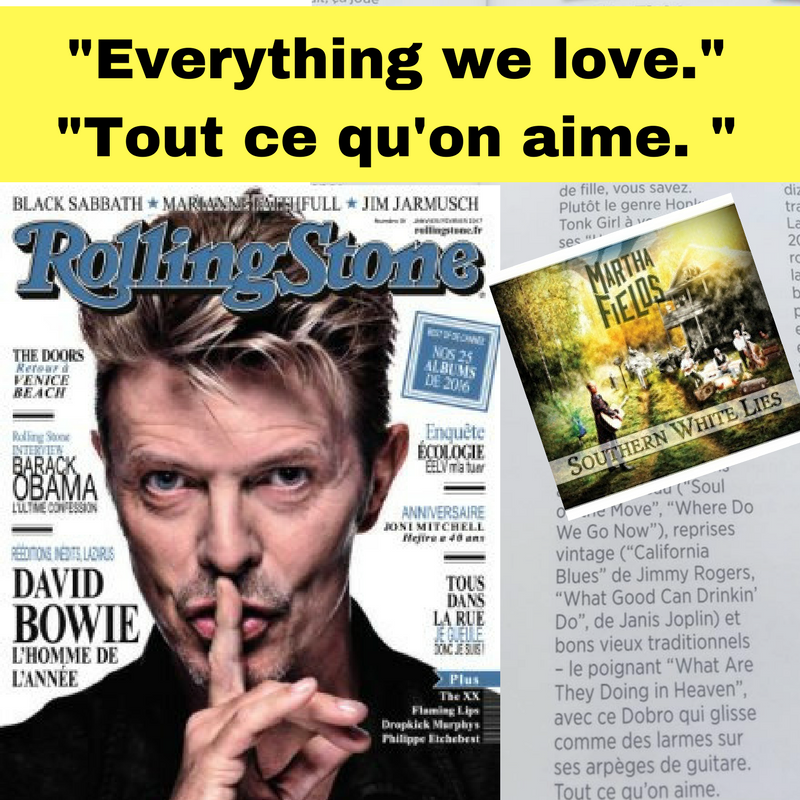 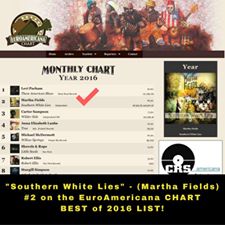 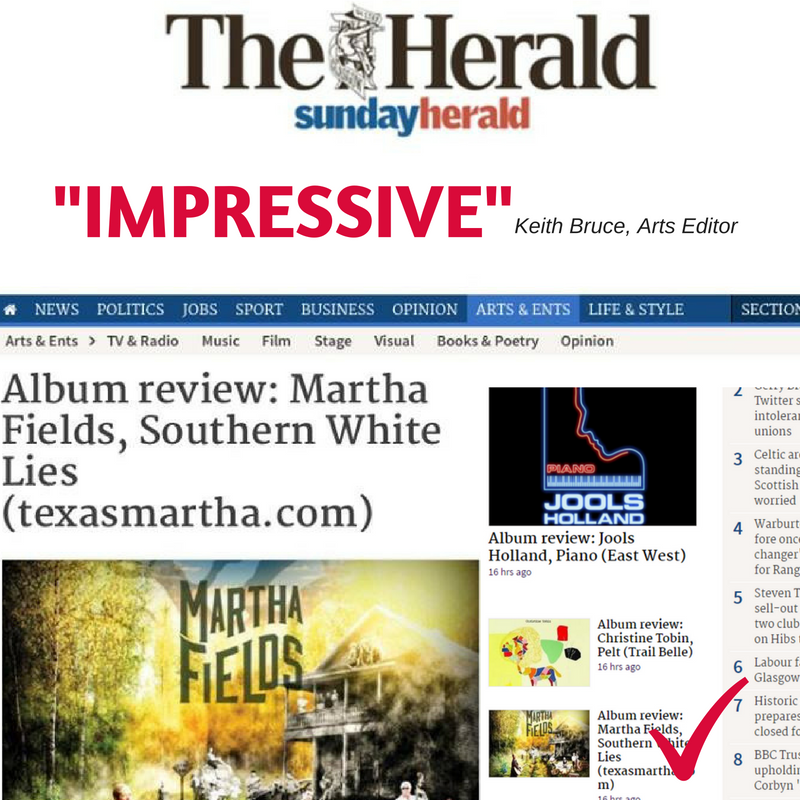 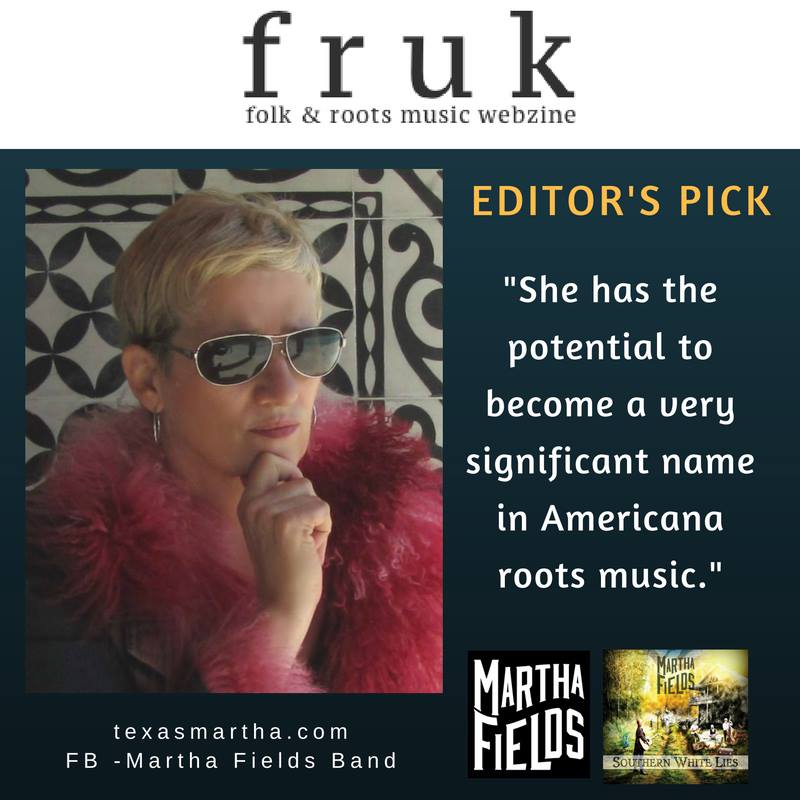 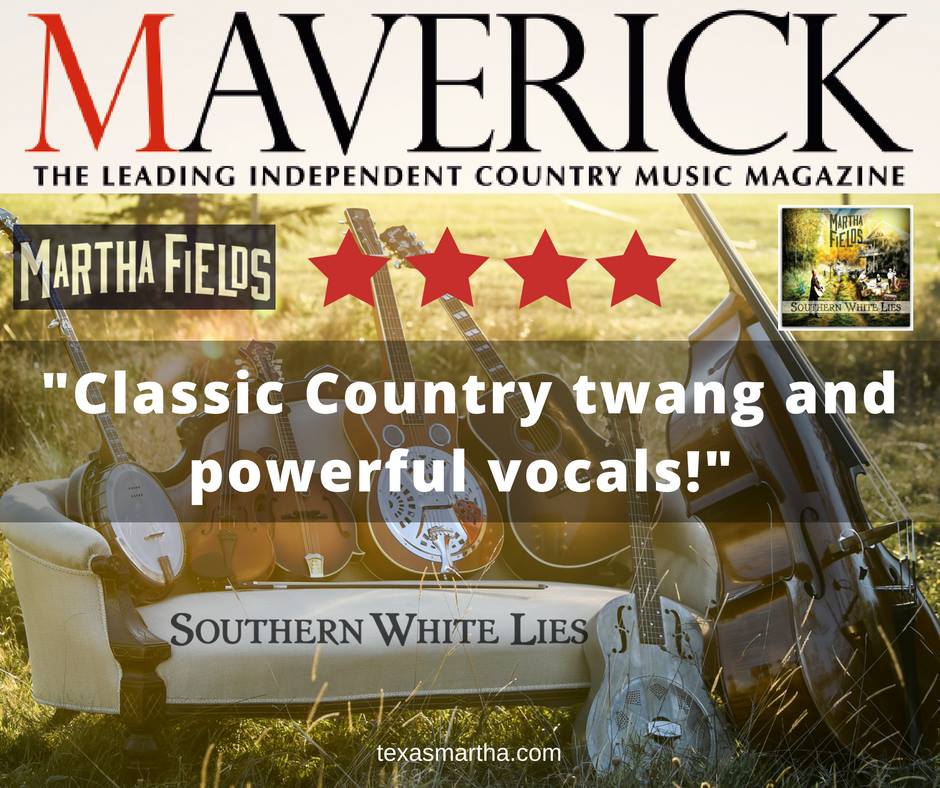 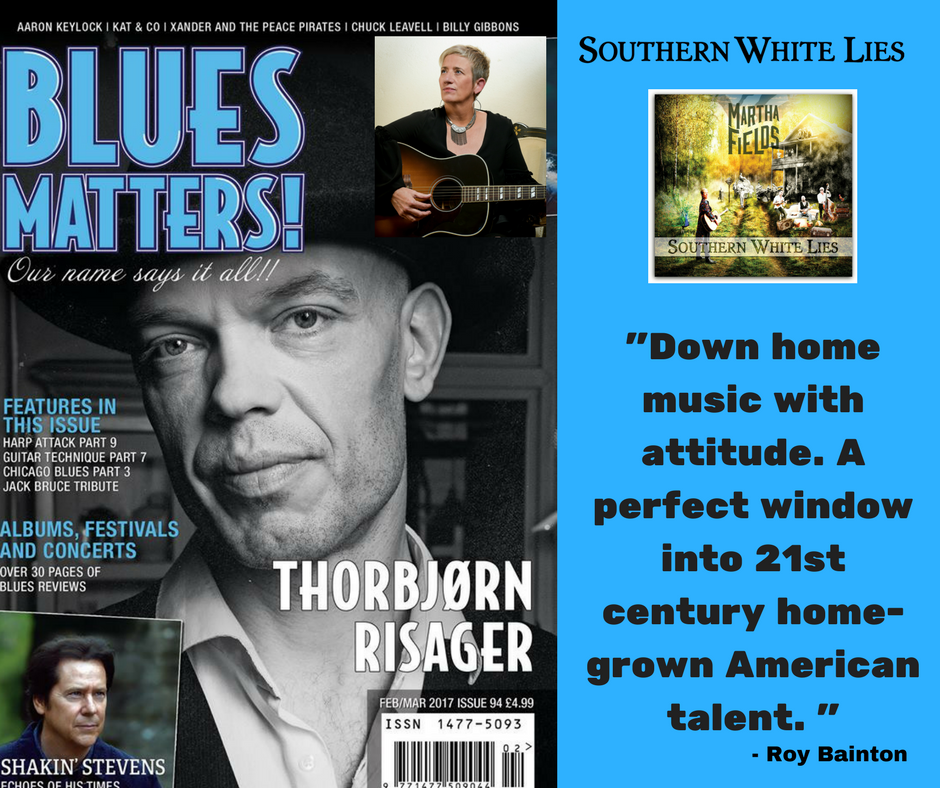 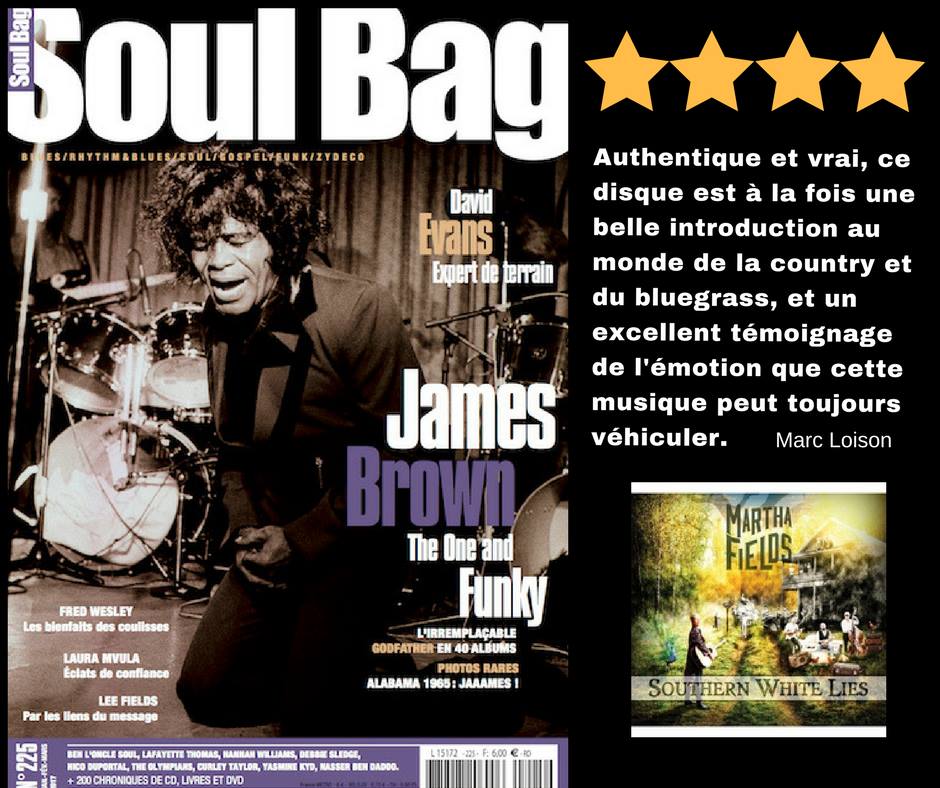 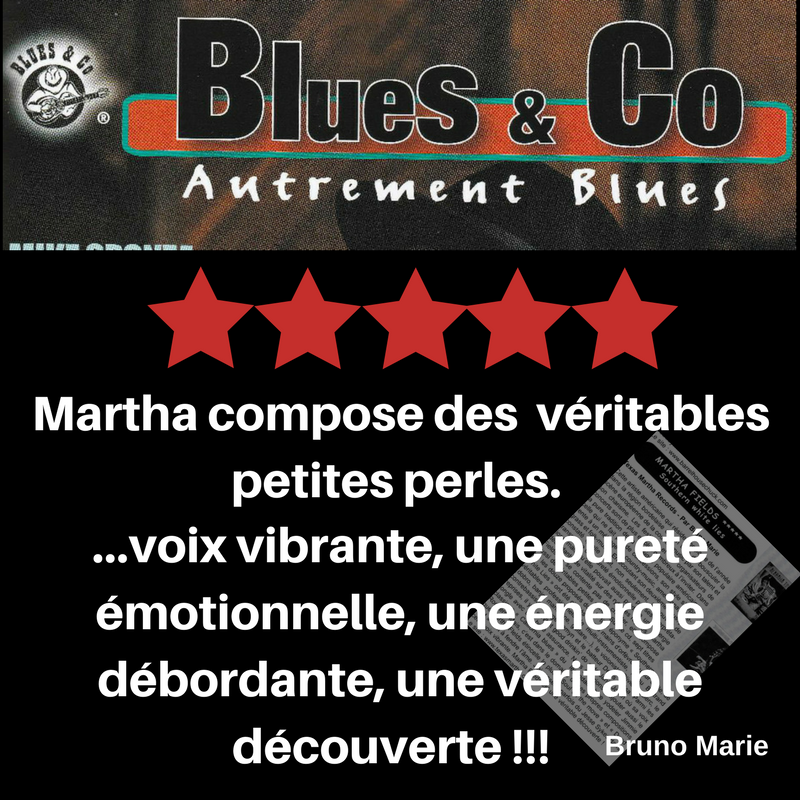 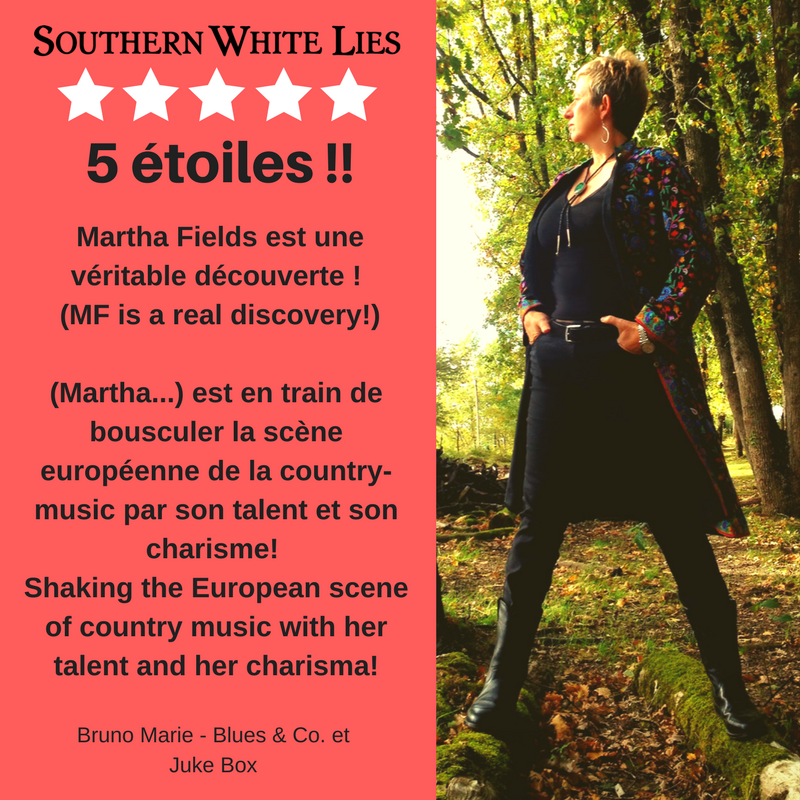 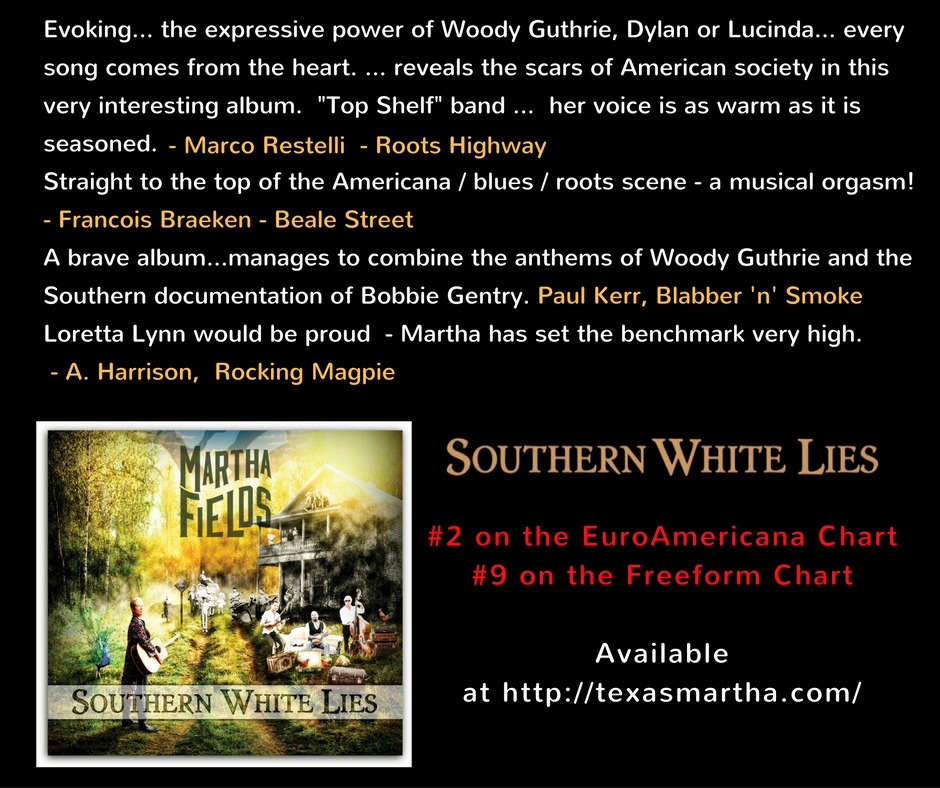 You can read the full version in Dutch here. http://rootstime.be/ 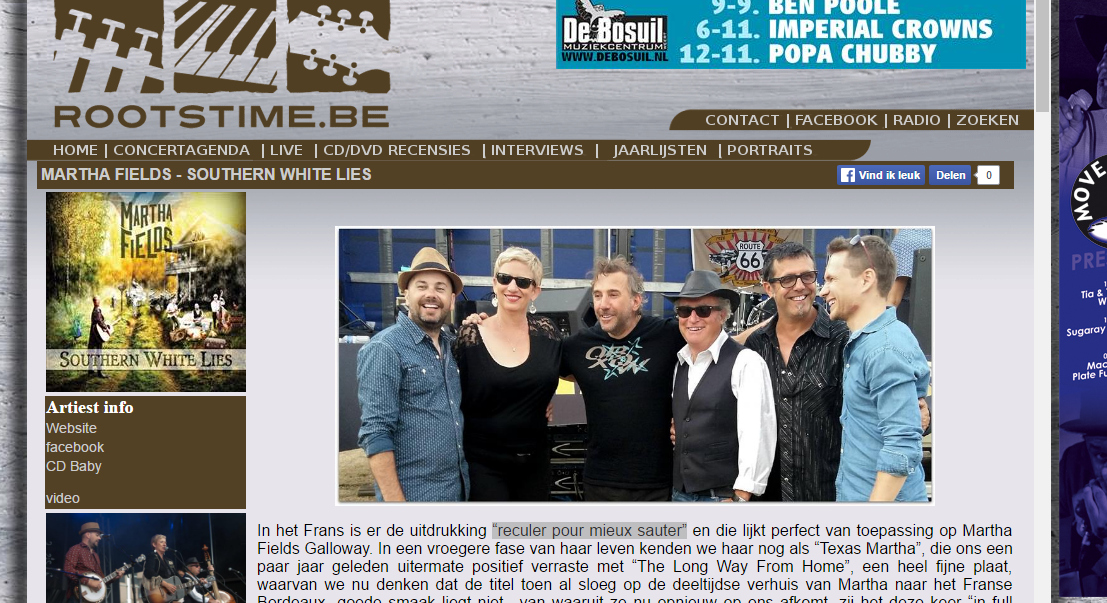 Another great  review by Alan Harrison (UK) from the Rocking Magpie.   Here is the link (or read below). https://rockingmagpie.wordpress.com/cd-reviews-2015/texas-martha-and-the-house-of-twang-long-way-from-home/ 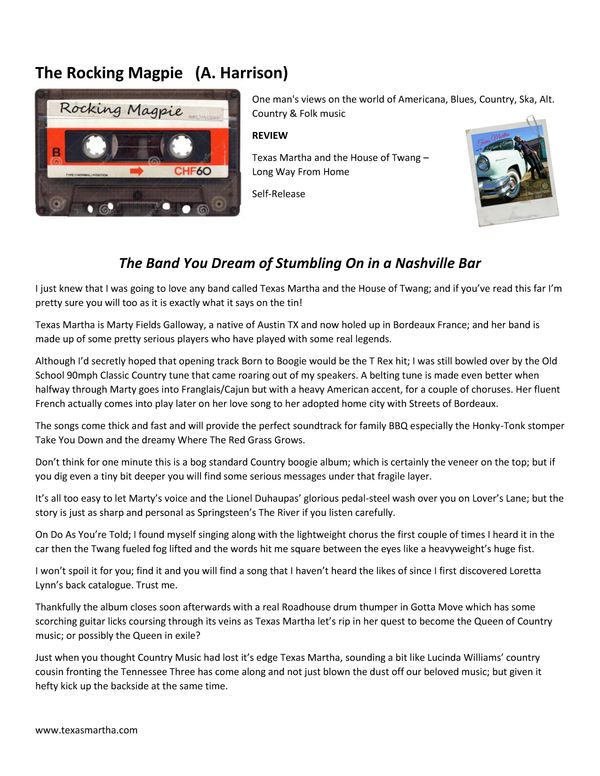 Thanks for the great review and the 4 Star rating John Conquest, Editor, 3rd Coast Music. 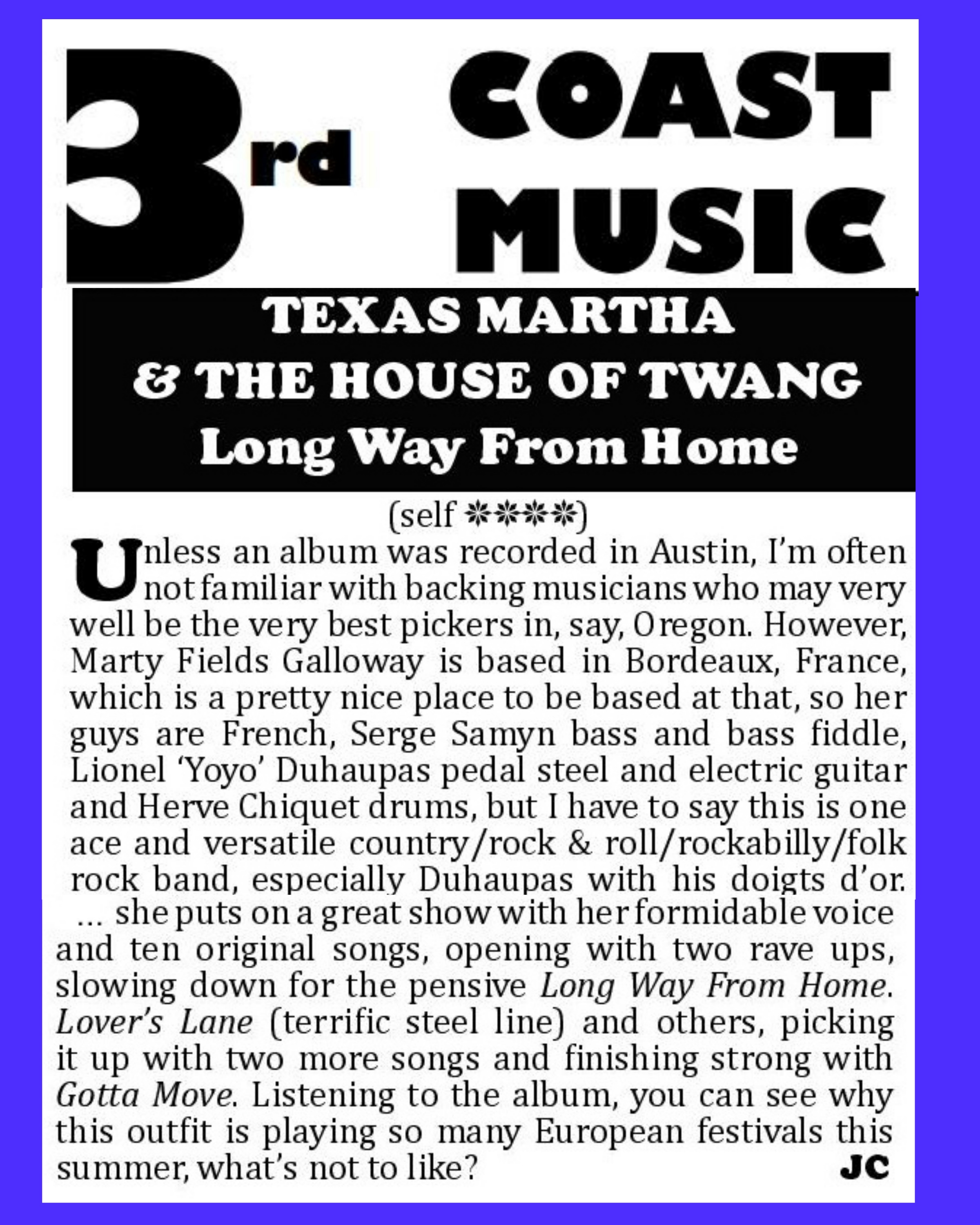 Our new CD "Long Way from Home" has been receiving excellent reviews from around the world.  (Keep reading below for various recent critiques.)

Francois Braeken, DJ and music critic from Belgium, wrote a recent review in his publication  "Beale Street". You can click to the full review here. http://www.bealestreet.be/index.php/texas-martha-and-the-house-of-twang-long-way-from-home

Here is an abbreviated, translated version -  "Texan singer / songwriter Marty Fields (who wrote all 10 originals on "Long Way From Home") is currently bombarding - with considerable success -  the European country / roots / rock world from the port of Bordeaux and which no doubt explains why its House of Twang members (Serge Samyn / bass & bass fiddle, Lionel "Yoyo" Duhaupas / pedal steel and electric guitar, Herve Chiquet / drums) clearly carry French nationality. A successful trans-Atlantic marriage is so immediately apparent with the opener which speaks volumes: Texas Martha and the House of Twang are indeed "Born to Boogie.  Lionel “Yoyo” Duhaupas, pedal steel and guitar player, plays at such a devilishly high level that it seems almost alien ..... More in the Americana style,  Texas Martha’s sublime "Lover's Lane", the Bob Seger -esque "Johanna" (with Vincent Samyn on keyboards) and  "Where the Red Grass Grows" which reminds me of Lucinda Williams . Getting lost in "The Streets of Bordeaux" with Martha Fields, she offers us a musical feast, a heavenly beautiful pedal steel duels with the harmonica on the title track "Long Way From Home", hell and heaven are colored by the beautiful gospel-tinged "Do As You Are Told" and the dance party continues with "Gotta Move" that makes us want to dance until early in the morning. Texas Martha  (Marty Fields) has a voice which  is a beautiful instrument and The House of Twang  is overall a warm, creative, professional country / roots / Americana enterprise! (Francois Braeken, Beale Street).

Another fabulous review from the LoneStar Times (by Remo Ricaldone). We certainly have Italy in sight.

"Marty Fields Galloway, known by the stage name of Texas Martha, has roots in the hills of Kentucky and West Virginia but has also found a home in Austin, Texas where she developed her honky tonk and boogie sound. For part of the year anyway Texas Martha lives in France, in Bordeaux, where she found a fertile place for her music and has earned considerable praise and a good 'fan base'. "Long Way From Home" was, in fact, recorded in the French city in the company of some excellent local musicians who have roots in country, rock and blues. The album is really enjoyable, a wide and varied repertoire of energetic country music tinged with rock, folk and blues, and infused with  extreme passion. All the songs were written by Martha, who plays her part with determination and conviction, freshness and an obvious deep love for these sounds. It is this spirit that pervades all  ten songs, making the album a success and one of the most enjoyable in recent times, the overwhelming beginning with "Born To Boogie" and at the close with the equally powerful "Gotta Move".  We experience an alternation of truly reflective, poetic and solid honky tonk, united by the common denominator of the talent and warmth of Texas Martha. This band is a must to mark in your agenda and  see in concert on their European dates next summer. www.texasmartha.com. (Remo Ricalone, Lonestar Times)

Click here to read the entire review at the Lone Star Times (in Italian) http://www.lonestartime.com/…/texas-martha-house-of-twang-l…

Here is a review by Ian Parr (Ian's Country Music Show, Edinburgh, Scotland). "When, I just received an advance copy of the New Album, Long Way From Home by Texas Martha & the House of Twang tonight, the first thing I have to say is that it has blown my socks off...  this entire album is full of great energy and passion for music, which clearly comes through with every song. The album starts off with "Born to Boogie", (all the songs on the album are written by Texas Martha,) and if you do not get up to dance, then I bet your feet can not stop tapping, it is a great song to start you off on a wonderful trip, and trip is correct as the second song is called "Take You Down", taking us down south, feeling that summer heat as again you start to dance. Then you arrive with "Long Way from Home", more of a slower dance track with a little hint of sadness and a great harmonica solo. "Lover's Lane" is the 4th track which is a very heart felt song, and you hear the great voice that is Texas Martha, and this is followed by "Johanna", a song dedicated to a friend of hers, a song full of love in her voice.  "Streets of Bordeaux", brings you over to Europe, with just a hint of French in the song... and she really sings in French really well... "Where the Red Grass Grows" builds you back up again to the next song "Strike" and your feet start tapping, by now when "Do as You are Told" you will be up and dancing again... which is just as well, as "Gotta Move" is a dance track we all should have on our playlist to put a smile back on our faces...  my verdict, this is one cracking album and worth every penny/cent/euro.
_____________________________________________________________________________________________

Another fine review from the Netherlands by Martin Overheul (in Dutch) from the February 24th issue of the AltCountry Forum. http://www.altcountryforum.nl/2015/02/24/texas-martha-the-house-of-twang-long-way-from-home/

Here is an excerpt:  TEXAS Martha and the House of Twang divide their time between the US and France, where they now have a good reputation as a live band.  If you listen to the recently released Long Way From Home listening, this fact will not surprise you. Martha, who in real life is called Marty Fields, and her three companions (Lionel Duhaupas on guitar and pedal steel, Serge Samyn on bass and Hervé Chiquet on drums) opened with the rousing rocker Born to Boogie, a number which it is virtually impossible to sit still for long. The income twang guitar Duhaupas determines the sound, but what the rhythm section lays down is not bad either. Martha give us a perfect bite of Texas for this 'feel good' album where the Mediterranean sun plays a significant role. Listen with a good glass of sauvignon blanc at your fingertips.  (Martin Overheul, AltCountry Forum)